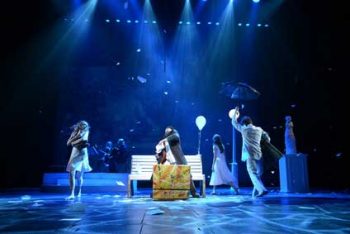 For many years, I had a mental cut-off point–the age at which I thought I’d give up theater unless I had made my mark on the Broadway stage, mainly as a playwright.

I think that age started at the ripe old age of 40. Then, over the decades, the point at which I’d admit defeat grew older and older. Today, it is nonexistent. I am well over 65 and still at it.

I confess I’m no longer looking longingly at Broadway, but I’ll take it if it comes.

But, like most people over retirement age who are continuing a long love affair with the theater or who are finding it a new romance, I see loads of other theatrical opportunities arising.

First, the number of senior theater groups is growing around the world.  Managers of homes for the elderly are looking for ways to improve the quality of life for residents. The term ” liveable community” is extending to care homes and elderly facilities.  Those seeking programs and activities for seniors look toward theatre as a way to improve the quality of life and social opportunities for their residents.

Clovis Clark, age 59, is a professional nurse. But she also has spent time recently as a conniving, murderous sister and a madam in a brothel.

Senior Theater–a form of drama designed for older adults, where senior citizens are actively involved–is on the rise. In 1999, there were 79 companies in the US.  As of 2016, there are over 800 groups with many around the world.

Many theater performers want to be on stage when they are older. A good number have never acted before, others have performed when they were young and want to do it again.  Some have been in Readers Theater groups and others have acted all their lives and they know the joy of performing.

Seniors have time to explore the theater.(Wikipedia)

Senior Theater groups are emerging every day in American theaters.  For many seniors, acting is a way to explore new lives and experiences. “Clovis Clark, age 59, is a professional nurse. But she also has spent time recently as a conniving, murderous sister and a madam in a brothel. Her latter roles came courtesy of an Atlanta theater group, the Past Prime Players. “I love this,” says the Ellenwood, Ga., resident, who has performed in dramas, comedies, murder mysteries, skits and monologues. “Acting is an opportunity to become someone else.” (WSJ, by Sally Abrahms)

Seniors also are finding their place in opportunities as diverse as directing, stage managing, costume design, and volunteering services at community theaters.

The cadre of authors writing for the theater is seeing more playwrights, new and seasoned, well over the age of consent.

The challenges haven’t deterred Monciella Elder, 61, from becoming a theater director and playwright. In 2009, the professional singer and actor had to stop performing due to multiple sclerosis. “I was so depressed,” she recalls. Then a nearby senior center asked her to run its drama club. Soon after, she left to found Past Prime Players in Atlanta.

Ms. Elder has taken the 18 or so actors, ages 57 to 68, “from ground zero,” she says. She .g with lighting, sound and set design. In the past four years, she has written and directed more than 20 plays and skits. (WSJ)

As writers rather than actors or directors, playwrights of “a certain age” are not as easily identifiable to audiences and the general public because so much of our work is behind the scenes.   I belong to the International Centre for Women Playwrights (ICWP), also open to men, whose mission is to support the work of women playwrights and combat gender inequality in the theater.

To the surprise of many of its members, a large number of us were older than any of us thought, including many who were consistently produced nationally and internationally.

I had assumed that I was the odd woman out among many young, vibrant, producing playwrights when, one day, the listserve discussion happened to turn to age. Quickly, it became a competition to see which of us was the oldest. A good number were over 50 or much older. And…

Now, at 89, it’s fair to say he’s become something of a silver-haired Shakespeare: the award-winning playwright has about 40 shorts, a half-dozen full length plays and a book, Short Plays by the Dozen: A Collection by Arthur Keyser, to his name. “I wake up in the morning and I can’t wait to get to my computer to write,” he says.

The late-in-life start has led him down a path that he’s passionate about. In fact, today, with writing plays, attending performances, participating in a playwriting group and more, he may be about as busy as he was when he was a corporate lawyer working 70 hours a week. (Get Old)

Senior playwrights do not have to be as dedicated as Keyser to find benefits in the arts. The Delaware Theater Company has joined forces with a retirement community, the Ingleside Retirement Apartments, to create a Playwriting for Seniors Program.

At the end of the multi-week program, participants have their original pieces performed by professional actors to share their experiences with their community and family.

And many seniors are continuing an already established producing and publishing career.

Doris Gwaltney had published several novels when she discovered that her work had a potential for the stage.

We first met at a publishing trade show in Roanoke, Virginia, where our paths happen to cross.

The result was our publication of two books of historical monologues ideal for staged readings in theaters and classrooms–A Mirror in Time and Behind Closed Doors.

His The Concise Christmas Carol is a perennial one-man show favorite which he still performs annually.

The Senior Playwright as Publisher

At about the age of 60, I became aware that I knew a lot of playwrights who had worthy plays that were not in the catalogs of the major publishing houses. Internet advances had made publications easier to manage and promote than in the days of mailings and catalogs. I put my oar in those waters and co-founded HaveScripts which eventually became Blue Moon Plays. From the beginning, I saw the potential in senior theater groups as both social and artistic ventures.  These groups clearly had a range of missions, from highly professional groups to readers theater hosted by retirement and assisted living facilities.

At Blue Moon Plays, we continue to promote the work of senior audiences, playwrights, and theater groups, among others, because they are a viable artistic presence in the community. They are a source of vibrant entertainment for the public at large, a place where seniors can continue to find a presence, a sense of involvement, and community, as well as a way for community and professional theaters to expand their community involvement and audiences.